It’s always wonderful seeing cars and trucks modified strangely—not poorly, mind you, but antithetical to their intended purposes, you know? Take this wacky Continental GT, a typically boulevard-oriented luxury coupe that Bentley dressed up for the GP Ice Race in Zell am See, Austria. Programmatically, ice racing just isn’t on the typical Bentley owner’s menu. We’d lump the Conti’s sweet rally car–style modifications, from a roof rack–mounted light bar to a zany two-tone racing livery, amongst its out-of-place elements, too. But damn, it sure looks good.

The GP Ice Race Continental GT isn’t as out-there to Bentley as it might be to you, though. Bentley has been messing around on the ice for years now, having set ice speed records in 2007 and 2011. Of course, the engineers from Crewe didn’t simply slap some studded winter tires on the Conti and call it ready for Austria’s ice race event. A safety cage looms behind two front racing bucket seats with competition safety harnesses, and there is an onboard fire-extinguishing system.

Bentley says the blue-and-black paint job is a nod to the design worn by the Continental GT that broke the production-car climb record at Pikes Peak last year. We love that the front wheels are color-matched to the blue front section of the livery, while the rears are painted black to match the Conti’s back half. Perched atop the car is a nifty roof rack that seems to exist primarily as a mounting point for a sweet array of auxiliary LED driving lights. Bentley, adorably, also mounts a set of Bomber for Bentley Centenary Edition skis up there—probably useful for the driver should they get in a jam on the ice and feel like bailing for some après ice racing. 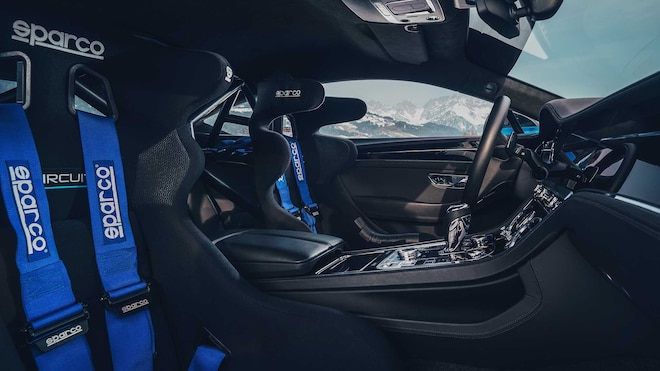 Other upgrades include a 15-millimeter increase in track width, a slightly taller ride height for extra ground clearance, and an Akrapovic exhaust system (the brand furnishes the optional sports exhaust for the production GT). And, yes, there are those studded Pirelli Scorpion Ice Zero2s. The underlying Continental GT is the twelve-cylinder model, because when you’re going ice racing, why settle for the (still quite quick and very satisfying to drive) V-8 model? The twin-turbocharged W-12 provides GP Ice Race Bentley’s driver, Junior World Rally Championship driver Catie Munnings, with 626 horses to play with.

If you thought the big Bentley might prove a handful on the ice, Munnings says otherwise: “I was amazed by how dynamic, nimble and responsive it is. It can dance like a lightweight rally car . . .” With the latest Continental GT’s more aggressive front-to-rear torque split in its sportier drive modes, we imagine she’s quite right.

Hopefully, she doesn’t partake too much in sideways behaviors during the Skijoring portion of the Austrian ice race event, though. That’d be where the car tows a skier through the same course it (separately) races through. Bentley has signed up skier Sven Rauber for the contest, noting that while Skijoring “dates back to the Olympic Winter Games 1928 in St. Moritz, when skiers were drawn by riderless horses,” the “2020 version” will feature “considerably more horsepower.” Know what? The more we think about it, a rally-spec Continental GT towing a skier in some obscure ice-racing contest actually seems quite on-brand for Bentley.