Restomods are all the rage in collector-car circles these days—stuff like Porsche 911s overhauled by Singer, classic Dodge Chargers with modern Hellcat V-8 engine swaps, and original Ford Broncos with hearts from brand-new Mustangs. Now even Acura is getting in on the game with a one-off restoration of its first-ever SUV, the SLX.

Don’t remember the SLX? By the end of the ’90s, all of the major luxury players decided that a rugged-looking, people-hauling SUV would be an essential part of their lineups. Acura, which launched in 1986, would ultimately design its own MDX SUV in conjunction with the new Honda Pilot, but those vehicles were still years away. Deciding anything was better than nothing, Acura began supplying engines to Isuzu for its upscale Trooper model with an agreement that a badge-engineered Acura SLX would come from the partnership. The SLX launched in Acura showrooms in 1995 as a lightly disguised Trooper with a Honda-built 3.2-liter V-6 engine underhood. A 3.5-liter V-6 came later in 1998, a year before the SLX was discontinued after a total of 6,590 were sold.

One of that number was just “restored and reimagined” for the next installment of the RADwood car show, which is being held in Orange County, California, on Saturday, December 7. The 1997-model-year SLX had its antiquated engine and all-wheel-drive system yanked out in favor of a 350-hp, “race-tuned,” turbocharged 2.0-liter inline-four with VTEC paired to a 10-speed automatic transmission. Its output is now shunted to the ground by the brand’s proprietary Super-Handling All-Wheel Drive (SH-AWD), and an independent rear suspension is fitted in place of the original live rear axle. The components were borrowed from a 2020 Acura RDX, which in stock form produces 272 horsepower and 280 lb-ft of torque. The build was completed by Acura engineers in Ohio on nights and weekends. 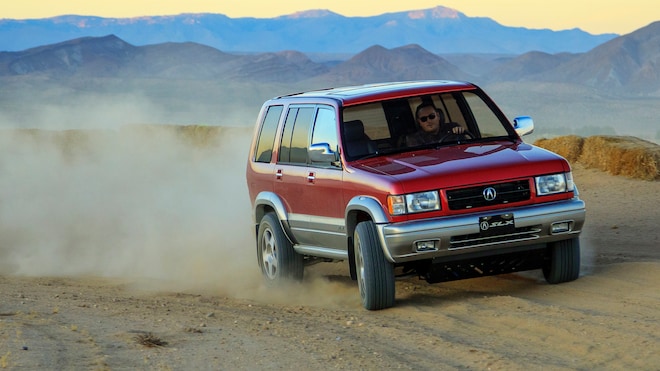 The other modifications are minor in comparison: a new Performance Red and Champagne Silver two-tone paint job, 17-inch Fifteen52 Tarmac wheels wrapped in Yokohama Geolander A/T tires, and a body-color shell for the rear-mounted spare tire replacing the original soft item. The interior was similarly refreshed with new Milano leather surfaces and gray wood trim. The subtle “SH-AWD” badge on the rear is one of the few exterior tip-offs to the contemporary drivetrain.

The RADwood car show has been a staple of the neoclassic car scene since 2017, with an emphasis on the cars and culture of the 1980s and ’90s. Shows have been hosted in many locations in the U.S. including Sonoma, Los Angeles, Detroit, New Jersey, and Philadelphia. Acura is also bringing an early first-year Acura NSX, and a 1996 Acura Integra coupe, while a private collector will display his original 1996 Acura SLX.

Read More
Modern Review: The Integra Type R Still Blows Minds
What If Today’s Cars Were Designed Decades Ago?
The Acura Vigor Was Way Weirder than You Remember