CHICAGO—Did you think you were lucky when you took possession of one of the 2017-2019 Ford GT supercars? You were, but now it turns out you would have been even more fortunate had you waited to buy, because the 2020 Ford GT stunned us at the Chicago Auto Show—and  it takes the road version of Ford’s 24 Hours of Le Mans contender to another level.

There are a lot of notable improvements to the 2020 Ford GT, but what really has our tingly bits a-tingling is the new Liquid Carbon package, which basically does away with pigmented paint. This limited run of Ford GTs will be painted only with clearcoat, making the body’s carbon-fiber weave the key styling element. Each Liquid Carbon car will be built from a single batch of carbon fiber to ensure that the weave lines up properly with the lines of the car, which limits production to a dozen per year and helps to explain the $750,000 price tag.

Yes, we’ve seen bare carbon-fiber parts before, and a few European exotics have done entire cars, but the Ford GT’s bare weave is absolutely breathtaking. If up-and-coming car fanatics don’t start putting posters of the Liquid Carbon GT up on their wall, then our society is doomed. 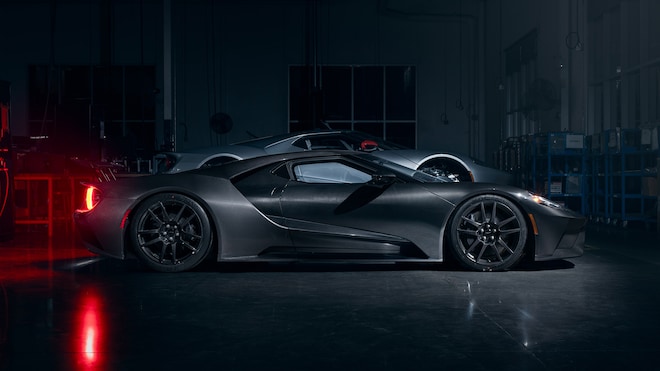 Incidentally, Ford says the bare carbon-fiber look can be combined with painted calipers, painted mirror caps, and racing stripes that run over the top of the car, features that will also be available with regular paint.

We’ll withhold judgement until we see a Liquid Carbon GT so adorned, but we strongly suspect such defilement of the naked carbon-fiber look might be good grounds for capital punishment. But if clear-coated carbon fiber isn’t your thing, Ford has come up with a new version of the famous blue-and-orange Gulf Racing Heritage paint scheme with black pinstripes, a new number (6 instead of 9) and optional carbon wheels.

Meanwhile, the 3.5 liter twin-turbo EcoBoost V-6 gets a host of internal improvements, many inspired by the track-only GT Mk II version, including gallery-cooled pistons, higher-energy ignition coils, larger intercoolers, and revised ducting in the buttresses which Ford says increases airflow by 50 percent. The engine calibration is revised and the GT now gets a standard-fit titanium exhaust from Slovenian manufacturer Akrapovič, which weighs 9 pounds less than the current car’s exhaust.

The upshot is a 13-hp boost (up to 660 hp), a broader torque curve, and the ability to deliver peak power under hot and hard track use. And speaking of the track, Ford also stiffened the damping in Track mode for better handling during quick transitions. Ford describes deliveries of the 2020 GT as “ongoing,” which means that would-be buyers who weren’t lucky enough to be part of the original allocation just won the lottery. Who says procrastination doesn’t pay off?